Ipad Art--Breaking Story, and then a tale from a year ago 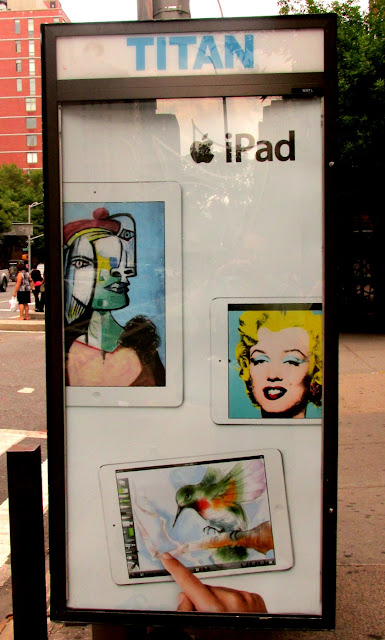 It seems to me like just yesterday that they introduced the iPad, but I wonder where technology is headed now...

First, the breaking story from the internet (Thenextweb)


Apple is reportedly launching its ‘iPhone Reuse and Recycling Program’ in the United States today, giving customers the ability to trade-in their existing handset and obtain a discount on the latest model.

In a tweet earlier today, CNBC said Apple had confirmed the roll out to its Technology Correspondent Jon Fortt.

9to5Mac reported earlier this week that the trade-in price will vary for older handsets depending on the condition of the display and physical buttons, as well as any engravings or liquid damage affecting the device.

The article also suggests that to be able to trade in an older iPhone, it must be on-contract and activated while the customer is in the store.

The trade-in credit will then be offered as a gift card, which the buyer has to spend at that time against a new iPhone. It cannot be used to discount any other products available in store. The old iPhone will then be put in a plastic bag – the user gets their old SIM card back – and an Apple employee will ask whether they want any help setting up the new handset.

Of note, however, is CNBC’s claim that customers will need to leave the store with a new contract. We’ve reached out to Apple to confirm the roll-out of the ‘iPhone Reuse and Recycling Program’ and other finer details, so we’ll be sure to update this piece if and when we hear back.
Featured image credit: WANG ZHAO/AFP/Getty Images


Next, a Scientific American blog from last year

(Note: Updated below with my decision.)

My birthday comes a few weeks before the holidays. This year my wife got me an iPad. I love it. (Related: her, too.) I’ve downloaded dozens of apps and have spent most of the intervening weeks playing with it. I don’t like to be without it. And yet I am seriously considering asking her to take it back to the Apple store for a refund. I worry that in two months it will be obsolete.

For all of Apple’s famous unpredictability (unlike some of its competitors, the company refuses to announce what it is planning to announce before it announces it), its hardware releases have been disarmingly regular. The iPhone, for instance, first went on sale in June 2007. Apple released subsequent models in July 2008, June 2009 and June 2010. September is the season of iPod Nano and iPod Touch updates. As for the iPad, the first version went on sale on April 3, 2010. The iPad 2 followed 49 weeks later. As we approach March 2011, the question on my mind—and I’m willing to bet on the minds of lots of other extraordinarily good boys and girls this year—is whether the iPad 3 is mere weeks away. If so, I’d like to return mine and get the new model when it comes out. If not, I’ll keep what I have.

Rumors have been abundant, as is usual with Apple. In December the Taiwanese technology Web site Digitimes predicted that Apple would introduce a new iPad at the MacWorld Expo in late January. (Digitimes leans heavily on orders placed with Asian component suppliers for its predictions.) Yet that report has since been widely criticized, with many commentators noting that Apple hasn’t attended MacWorld since 2009.

Yesterday All Things D’s Kara Swisher wrote that Apple’s late-January event will be held in New York City—not Silicon Valley, where hardware announcements are generally made—and will focus on a “media-related announcement,” perhaps something pertaining to iBooks or Apple’s iAd advertising unit. No iPad at this party. Alexia Tsotsis at Techcrunch confirms that report.
So does that mean the new iPad isn’t coming at all? I could live without my iPad for two or three months, but a half a year will be a long time to wait for a package that’s expected to have an upgraded processor, screen and camera.

Then again, I’ve waited two years already. What’s a few months’ more for a guarantee of a year of not suffering new-gadget envy?
Readers, what would you do?

UPDATE (1/5/12): This has been a tougher decision than I thought. A number of commenters here both here and on Twitter recommended that I keep the iPad 2 then sell it when the iPad 3 comes out. iPads hold their value pretty well, and the market is large and liquid. That was a very tempting idea, but I’ve never been much of an eBay user, and recent forays onto Craigslist have left me wary of scammers and crazies. And then I calculated that if the iPad loses $200 of its value between now and the release of the iPad 3, that would work out as a $100/month rental (assuming of course the iPad 3 comes out in March), which doesn’t seem to make much economic sense. And so this morning, I turned to Settings > General > Erase all content and settings, which felt like the digital version of putting the family dog down. It’s now in a mailer back to Apple returns.
In related news, later this morning I remembered that 2nd generation Kindle screens are frustratingly difficult to read in a dark subway car.

Let me  see if there are predictions about the future

Posted by Lawrence Kreger at 8:58 PM